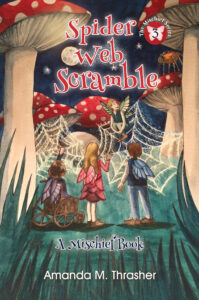 A Mischief Book – Book 4 on the way 😀
Chapter Book Series for girls and boys; independent reading 1st to fourth grade.

“Hang on—we all have our own star?” Jack blurted out louder than he’d anticipated. “And if we touch it, we’ll be granted a wish, a real wish?”

Squeals, giggles, and gasps broke out among the fairies. The elders laughed as they remembered their first scramble in conjunction with the stars. It would be a wonderful, magical night for every single participant.

Mademoiselle Francesca noticed that Pearle looked a little bit worried. Walking up behind Pearle’s chariot, she placed her hands on the back of her chair.

Mademoiselle Francesca turned Pearle’s chariot around and pushed her aside so they could speak in private. Pearle’s tiny ears pricked straight up; she didn’t want to miss a single word of what Mademoiselle had to say.

“Mademoiselle, I usually hover and fly above Lilly and the others while they bounce. Sometimes I bring them fairy-juice, refreshments, and encourage them to continue when they are tired. But it never occurred to me to bounce on the webs until now. It sounded as if even I could join in.”

Pearle looked down at her legs, dangling in her chariot. “But I don’t see how that could even begin to be a possibility with the scramble rules. Rule number one states: do not engage your wings.” Puzzled, she waited to see what Mademoiselle would say.

Mademoiselle studied Pearle’s face for a moment and said, “Pearle, only you can decide if you want to pursue your star. You do have one with your name etched into it, and you are surrounded by fairlings that love you.” She knelt down and looked into her eyes. “Your physical size, my little one, is not an issue; it’s your strength from within that will determine a win, a strong heart that will set you apart.” Mademoiselle Francesca chose her words carefully and spoke softly. “If you scramble, dear, remember—the second you land on top of your first web, look high in the sky for your star, the one with your name on it. Once you have found it, follow it throughout the spider web course. As soon as you land on the last spider web, push harder than you’ve ever pushed before. When your star is in sight, continue to fly as hard as you can. Once you believe you can reach out and touch it with the tips of your fingers, then—and only then—reach out and grab your star.”

Pearle stared straight into Mademoiselle’s dark brown eyes and asked, “Mademoiselle, if I scramble and race, reach out and manage to touch my star, what will I do then?”

Mademoiselle smiled sweetly at Pearle and tapped the tip of her tiny nose. “Dear Pearle, if you manage to touch your star, then simply make a wish.” She bent down and kissed the top of her head. “And if you are lucky, dear, because you are surely pure of heart, your wish shall be granted.”

“And then, Mademoiselle, then what happens?” Pearle asked eagerly.

“Magic dear, the most beautiful, magical night that you’ve ever experienced shall unfold right before your eyes. It’s magical, simply magical.”

Pearle’s eyes lit up. “Magical, how wonderful it must be!”

“A word of advice. Choose your wish wisely and it will be granted.”

Mademoiselle squeezed Pearle’s tiny hand in hers, turned Pearle’s chariot around, and pushed her back toward the group of fairlings where Lilly, Boris, and Jack were waiting for her. Jack tried to listen to what Mademoiselle had said, but her voice was so soft, he couldn’t hear a word.

“Thank you, Mademoiselle,” Pearle said softly. “I will remember what you have said. In fact, I don’t think I will ever forget it.”

Mademoiselle Francesca winked at Pearle, nodded at her friends, and then simply disappeared.

“Pearle, are you all right?” asked Lilly. “What did she say?”

Pearle told her friends about the decision that she needed to make. Lilly, Boris, and Jack felt sad that they hadn’t even considered Pearle scrambling the webs until now. Like Pearle, it had not even crossed their minds.

“What else did Mademoiselle say?” asked Jack. “It must have been very important.”

Pearle smiled and recited the words that Mademoiselle had shared with her. “Your physical size is not an issue; it’s your strength from within that will determine a win, and a strong heart that will set you apart.”

“Mademoiselle is so wise,” Lilly said. “I want to be just like her when I grow up.”

The chatter among the fairies was getting louder and louder. Excitement and anticipation had taken over, but the elders didn’t seem to mind; letting them enjoy the moment, they didn’t hush the fairlings.

Madame Louise laughed out loud, remembering the first scramble she participated in. Her wish had slipped out of her mouth faster than she could pull back the words. She was pure of heart, and therefore it had been granted. But she hadn’t made the right decision. She found herself surrounded by raspberry fairy twists, to share of course, but she was certain afterward that she could have chosen more wisely. To the present day, she’d never been able to look at a raspberry fairy twist without feeling a twinge of regret.

“With the exception of all of those twists, the scramble, everything about that night,” Madame Louise laughed, “it was as magical as Monsieur described!”

Mademoiselle Francesca fanned her face for fear of laughing too loud. Monsieur Pierre mopped his brow again with his handkerchief, and Madame Louise bit her tongue so she wouldn’t laugh out loud again. Finally, Mademoiselle Francesca raised her hands and silenced the excited group of young fairlings.

“Mark my words, little ones, it’s not easy to touch the stars. It requires stamina, strength, and perseverance. You must continue to practice spider web scrambling prior to the games to build your strength. It’s simply not as easy as it sounds.”

“I know you have many questions,” Monsieur chuckled. “But we don’t have much time.”

Lilly shot into the air, her golden curls flowing behind her as she darted toward Pearle.

“Why Lilly, of course you can,” Pearle said as she tapped her lap.

Lilly dove down and sat on Pearle’s lap. Jack flew down and piled on top of them both.

Boris hopped onto the back of Pearle’s chair. Ivy sat on top of Lilly, and Rosie perched on top of Jack’s shoulders. It was quite a sight to see: several little fairies playing and spinning on Pearle’s chariot until they turned green.

“Spin as fast as you can, Pearle,” Jack laughed. “Lilly will bail first.”

He was right. Though she rarely stayed on for long, a time or two she’d managed to turn gray, though not quite green. Round and around Pearle went, as fast as she could. One by one the fairies dropped to the ground. Their laughter was contagious, even the elders turned the other way for fear of losing their composure.

“I have no idea how Boris stays on for so long,” Madame Louise whispered. “Surely he is green by now?”

Jack finally fell to the ground, but Boris clung to the back of Pearle’s chair.

“Faster Pearle—only if you can, of course,” he laughed. “I’ve got it. I can stay on for a tad longer.”

Finally Pearle had no choice but to stop spinning. Lilly proudly announced that Boris, once again, was the champion of Spin a Fairling Green.

Boris shrugged his shoulders. “I don’t know, really. I just like that game. It’s my favorite.”

“Fairy delights and rosehip tea?” Lilly suggested. “Settling our tummies might not be a bad idea.”

Everyone sat down in the dining hall and Lilly poured everyone a cup of rosehip tea. She passed the plate and each hand reached for a fairy-delight. Boris grabbed two, but no one seemed to mind.

“Let’s meet at sun up. If we’re all to touch a star, including Pearle, we’ll need a plan,” Lilly suggested.

“I’ll make sure he’s there,” Boris said, pointing to Jack.

Boris laughed. “That doesn’t even make sense,” he said. “But I’m certain you’ll be the first one there!”