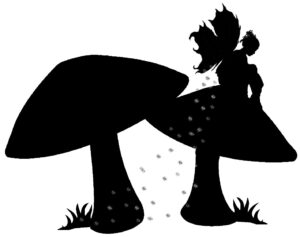 Lilly knelt down in the middle of the daisy patch and carefully placed the basket beside her. She ran her hand over the daisies as she wondered which one to pick. Out of the corner of her eye, she spotted the perfect one. Gently she snapped the stalk and laid the beautiful daisy carefully in her basket. Lost in her thoughts, she was not prepared for what happened next. It started with a very unusual sound, and it sounded as if it were headed directly toward her.

Lilly stopped gathering daisies, jumped up, and stared into the treetops. Branches were snapping like twigs and leaves were scattering everywhere.

“What on Earth is that?” she asked herself, puzzled. “I could have sworn in the midst of all the ruckus I heard a cry.”

There it was again, only this time the sound was clear. It was a scream. Someone or something was definitely in major distress.

Lilly continued to follow the sound. It was without question getting closer. She glanced around and decided it was in her best interest to hide or at the very least get out of the way. Just as she jumped behind a large oak tree, she heard yet another cry; this one, unlike the others, was recognizable.

“Oh no, this is going to hurt,” a voice said echoing through the treetops, and a body tumbled in the midst of scattering leaves and broken branches toward the forest floor.

The voice was closer than ever, and Lilly was scared.

She clung to the trunk of the large oak that she was hiding behind and waited for the inevitable, for the thing to land. She closed her eyes, hoping against hope that this thing wouldn’t actually land on her. One last piercing scream filled the air. Whatever this thing was, it hit the ground extremely hard, tumbling for several feet and landing smack in the middle of a large pile of debris—dried leaves, broken branches, and, of all things, a huge pile of nettles.

Barely daring to breathe, Lilly opened one eye. Her heart was pounding louder than ever, so hard that she thought it might actually jump out of her chest. Too afraid to move, she waited to see what would happen next.

Lilly opened her other eye. Wait a minute, she thought, that voice sounds awfully familiar.

“Help me, please,” she heard again.

Lilly’s eyes grew huge. I know that voice, she thought. She ran over to the nettle patch and stared in disbelief. “Boris, Boris is that you?”

The pile suddenly broke apart as a mangled figure tried gingerly to stand up.

Lilly rushed over to help Boris. Carefully she knocked the leaves off his clothes and tried very hard to clear a narrow path with her foot so that Boris could step out of the pile. She couldn’t believe her eyes. Boris had fallen from the treetops; this couldn’t be good.

Boris looked awful. His whole body was shaking and his skin was pale. Lilly noticed that he was clearly in pain. He had taken a tumble and, though not sure how fast he had been flying, she knew it must have been too fast causing him to lose control.

“Lilly, ah, I think I’ve broken my leg,” Boris sobbed as he tried to put his weight on his leg. He managed to stop crying just long enough to add, “And I think I’ve even broken my wing, or bent it at the very least.”

He was right; it was definitely bent.

Lilly was still in shock that Boris had fallen out of the sky. She said the first thing that came to mind.

“Boris, why did you just fall out of the sky?”

She put his arm over her shoulder and helped him to a nearby log. Boris tried very hard to be brave, but the pain was excruciating. He held onto Lilly as tight as he possibly could as she gently lowered him down onto the log.

Boris started to answer Lilly’s question, but he just couldn’t. He motioned for her to wait a moment while he composed himself. Finally, he managed to pull himself together long enough to speak.

“Oh, Lilly, I’m in so much pain, and I’m guessing trouble, too,” he sobbed. “Pain and trouble a very bad combination indeed.”

Find out more about the author